I Am Not Your Friend…

I Am Not Your Friend…

For a long while, I operated on the buyside of both a smaller regional DSO, and an elite national DSO. In that time, if I could have honestly started off every single meeting I had, it would have started with the phrase “I am not your friend!”. Obviously, that would be incredibly counter-productive to my cause, so I generally just settled with “Dr. Jones, it’s wonderful to meet you! You’ve built an incredible business and my job is to make sure a partnership is a good fit for all parties involved and get you the value you’re looking to receive!” Phew, that feels better for everyone sitting at the table. Amazing how semantics can alter the focus of a conversation greatly.

But I digress, as a buyside representative, my job was to find opportunities that were a good fit for my organization, and then pay as little as possible for those opportunities, thus maximizing the arbitrage that my organization would experience at their next capital event. Rinse. Repeat. This was done through a myriad of strategies, a couple of which I’ll touch on here. 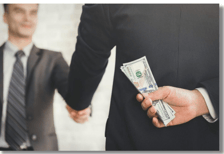 An unsolicited offer is the easiest way to source an inexpensive deal. Without proper representation there was little if any competitive process or properly determined EBITDA numbers. Most of the sellers were minimally educated and believed that the value of their practice was based off of a percentage of trailing 12 month revenue. IE – 70% of prior year collections. A good local broker could get 90-100% for the right practices, but that was rare. As a comparable, most 1MM practices running at a healthy margin rate of 20% (200k EBITDA) could sell for 800k in the private markets, but upwards of 1.4MM-1.6MM in the DSO space. My job was to find those opportunities before they were broadly represented and acquire them somewhere in between those numbers representing a healthy discount. I regularly offered 200k-400k more than a private buyer would, while still offering well below the standards my organization set. If the delta was to our benefit by a large enough amount, I would receive a bonus for the extra value to our organization. Roughly 80% of the transactions we consummated were unrepresented and traditionally traded at a 20-40% discount vs. the opportunities that we purchased from TUSK.

TUSK will review your current offer confidentially at no charge. Ensure you're getting the best deal possible today.

Much of the reason that DSO’s both thrive and rapidly expand, and the entire reason that the dental market is consolidating as quickly as it is can be attributed to efficiencies of scale. When private capital entered the market and allowed for professional management services to be built, profitability within the dental space improved dramatically for those organizations. The scale also allowed for en masse negotiations with payers and vendors often yielding staggering results. On the private practice side, every action has an equal and opposite reaction and those payors and vendors often reacted to the lessening margins on the corporate side by working to make up for some of those losses on the entities that had little or no leverage... that being you. In an M&A transaction this allows for two sets of books to be looked at. The numbers from your immediate practice performance which are often provided by your CPA and are reflective of the actual state of the business, and the comparable set of numbers that a DSO buyer will run indicating exactly how your practice will run within their ecosystem. The net effect is a dramatic increase in EBITDA and, correspondingly, a dramatic reduction in the multiple paid for your practice. IE – a 7X paid for your practice based upon your practices performance is very possibly a 4X based upon the DSO’s proforma modeling. While you can never assume you’ll get credit for all of those efficiencies, understanding how much room you have to negotiate will help you minimize any chances of leaving money on the table, which almost every seller does, in large amounts.

In the few situations in which I had a seller who was both well versed in M&A valuations and an accountant that was equally competent, I would attempt to back-end load as much of the value as I could, while making certain that there were reasonably significant portions of the deal value housed in a performance dependent earnout with clawback options should the practice not hit the performance levels necessary. Generally these were reasonable and tied to simple maintenance of existing practice performance. However, in some cases where the valuation got higher than a certain multiple, we would step the performance bogies up to offset the value increase. For example, the deal may be worth 10MM total, with 4MM of that available after 1 year provided the practice hit 100% of trailing twelve months numbers established at closing. But, let’s say that we had to increase the value to 12MM to win the deal. We would still provide 6MM cash at close, however the remaining would be broken up as follows:

Simple math to establish a simple example. We’ve essentially met the 12MM enterprise value the doctor wanted, while requiring significant growth in the entity for him to get it. Final point on this, if the seller can get the practice to 120% performance, it has significantly diluted the overall multiple paid on the deal because the additional EBITDA earned on the growth wasn’t figured into the deal valuation.

The idea that a buyer could dictate how a seller operates is a bit unfathomable to me, however I am seeing it more and more in the space within which I operate. Thankfully I’ve never done this to any of the sellers I worked with which is why it hits the tail end of this article, however it is definitively growing in popularity. The scenario includes a buyer representative beginning a relationship, building some rapport, gathering financials and ultimately submitting an LOI to a seller. The seller, wanting to ensure they’re making the right decision decides they would like to enlist the help of an expert in the space like TUSK Partners, but is promptly told by the buyers that they’ll rescind their LOI and walk away from the opportunity if the doctor is working with representation. The offer that was too good to be true, is contingent upon ensuring there isn’t a chance of a competing offer being submitted. Having looked at many of these “too good to be true” offers, they only survive based upon the buyers brazen attempts to keep everyone else from taking a swing at it. Anytime a buyer tries to limit the buyer pool, they are covering up a shortfall in the LOI, plain and simple.

And The Point Of It All…

There are a lot of things to consider when valuing and selling your business. While overall enterprise value is critically important and can provide generations beyond you with life altering wealth, it is rarely the most critical component of any transaction. When beginning the process, it is important to understand the players that are present, the goals they have (maximizing arbitrage, growth through acquisition), and the strategies employed to satisfy both of them. The dental M&A process is entirely built around one single function. Large entities (DSO’s) purchasing for as little as they can, while providing the sellers with enough value for them to believe they’re getting a great offer. The not so subtle and unspoken nuance is the difference between what a seller is happy with, and what the acquiring entity is willing to pay for that business. Corporations thrive off emotion and an uneducated seller’s inability to identify the actual value of their asset. The delta is larger than you think, and missed opportunity is the single greatest risk of every transaction.

About TUSK Partners: TUSK Partners (“TUSK”) provides M&A Advisory services in the dental industry.  TUSK has completed over $650M of transactions across all specialties.  With an in-depth understanding of the marketplace and access to 100’s of buyers nationwide, we help our clients confidently pursue M&A transactions that maximize their long-term value.  With our significant collective experience of over 40+ years of dental practice transactions, we offer our clients solutions that help them achieve their strategic and financial objectives. For more information, visit https://tusk-partners.com

About The Author: Josh Swearingen has over 15 years of leadership experience in the dental and healthcare industry, most recently serving as the CEO for Vesper Alliance, a DSO located in Cincinnati and Columbus, OH. Prior to that Josh was Director of Corporate Development for American Dental Partners and quarterbacked several of their largest transactions during his tenure there. Josh received his B.S. from THE Ohio State University

TUSK provides Industry-Leading Resources to Group Dental Practices and DSOs, such as:

We help you START, GROW and SELL your DSO.